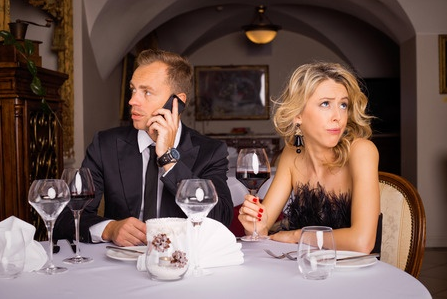 Maintaining successful romantic relationships can be tricky and complicated, and now that everyone is constantly plugged into their smartphones, it’s not getting any easier.

Baylor University recently did a study that showed that smartphones can be damaging to relationships, and can even cause more pronounced depression. The study focused on surveying about 450 adults about smartphone use while in the presence of their significant other. When one person felt that their partner was distracted from or disinterested in them in favor of their smartphone, conflict ensued, which caused lower levels of relationship satisfaction. This lowered level of satisfaction eventually led to overall life dissatisfaction and even depression.

We are all guilty of checking our phones and scrolling through social media sites when we’re meant to be spending time with other people. Scientific American has reported that just having your cellphone nearby – not necessarily holding it or even looking at it – when engaging in a conversation with someone else can lead to a lower level of connectedness, interest and closeness.

In theory, smartphones act as conduits to people who are not able to sit next to us, so shouldn’t they bolster relationships by keeping people in touch and making it easier to communicate? In reality, while smartphones may help you keep in touch with someone who lives far away, they usually act as distractions from what’s going on right in front of you.

If we’re not careful, this lack of interest and connectedness can lead to serious issues in relationships, especially romantic ones. When a couple that would typically spend Sunday afternoon engaged in conversation or some activity instead spends it sitting on the couch staring at their phones, partners may begin to feel unfulfilled by their relationship.

So how do we prevent that from happening to us?

Make time for your partner away from television screens, computers and smartphones. Set aside a specific period of time when you will spend time together, unattached to your phones. Make this a common occurrence – at least once per day. If you always eat dinner together, for example, put your cellphones in another room during dinnertime.

Make the bedroom a smartphone-free zone, too. Leave your phones in the kitchen and invest in an old-fashioned alarm clock. (Give your friends and family your home phone number to be used in case of emergencies.) With the smartphones out of the picture, you won’t have anything to distract you from asking each other how the day was, and reestablishing the connection that you had at the beginning of your relationship.

Keep these ideas in mind, and your relationship will not fall prey to disinterest and dissatisfaction that can be caused by the constant presence of smartphones. Check out our other blog posts for more advice on successfully maintaining healthy and rewarding relationships.