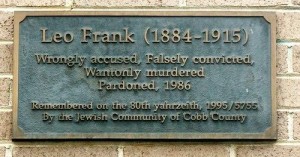 In these times of somewhat growing equality in the United States, with gay marriage slowly becoming a more recognized and accepted idea in most segments in the country, we seem to be living in the most equal of times. This of course is exciting, but it’s a case of two steps forward and one step back as we see rampant inequality in places like Ferguson and Charleston, which results in the most heinous of crimes. My heart grieves for Charleston and the people affected by that gross tragedy.

What gives America? What’s your problem? It seems we’re on a surreal seesaw, certainly a mix of hopefulness and tragedy. It is times like these that it’s beneficial for us to remember the people from the past who have helped us get to where we are, people like Leo Frank. His story must not go untold.

Leo Frank was a Jewish man lynched in Cobb County, GA in 1915, the last image of him being “dressed in only a nightshirt, his neck broken by the noose, his lifeless body dangling from a tree as townspeople rejoiced.” That image became an iconic illustration of Southern anti-Semitism and hatred.

Why was Leo Frank lynched?

Well, he was “convicted” of murdering a 13-year-old white girl who worked in the factory he managed. The murder and subsequent case was a melting pot of class, race, and religious conflicts, and is an ugly example of America’s turbulent history. Anti-Semitism played a gigantic role in his lynching. He was wrongly treated and judged throughout the entire process, and is an example of a justice system that is flawed and ripping at the seams.

I have spent the past several decades doing my best to raise Frank’s profile and to secure a much-deserved pardon. Again, his story must not go untold and his good, wrongly accused name must not go unpreserved. My efforts, along with several others, have succeeded in erecting two plaques on the side of an office building closest to the believed site of Frank’s lynching.

The memory of Leo Frank burns in America’s heart and brain, because it’s a question we all struggle with on a daily basis – is America more equal than it was yesterday? Or is it slipping down the slope toward bigotry, class warfare, discrimination, and more? It’s a struggle that keeps some people awake at night as they look out onto the city or town they live in, and that suffering, so covered up during the day, sounds as if it’s screaming into a megaphone. It’s a blast to the heart that can knock anyone off their feet. Many times in my own life I have felt that rushing wind of intolerance and many times I have been knocked off my own feet. None of us should ever be knocked off our feet.

It’s a crisis that pounds us into submission with each breath we take. Every time we turn on the TV, we are bombarded by horrifying news stories that breaks our hearts and crushes our spirits. While there are a few bright flowers in this garden of darkness, such as more tolerance for homosexuals and their quest for marriage, the darkness is gaining momentum – poisoning young minds and seeping into every crack in our society. There are riots on the streets, cops and civilians going head to head, churches where prayers are noised out by gunshots. There is suffering everywhere we look and the memory of Leo Frank burns in America’s heart and brain.

Where do we go from here? Keeping Leo Frank at the forefront of our minds, I would like to see an age of love entering the American consciousness, where people do their best to try to understand one another, to look one another straight in the eye and say “I want to know what makes you tick and if you’re not ticking, let me know what I can do to make you tick.”

It’s all about opening up one another’s heart, using good-natured hieroglyphics to decipher our deepest dreams, our deepest desires, our burning hopes for the future. Let’s do that. It’s what Leo would have wanted.